@ ALL LOCATIONS IN
Albania 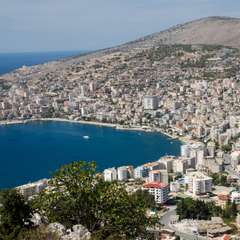 The modest Balkan country of Albania (AL) has a diverse landscape of grasslands, forests, and mountains, in addition to sunny coastline along the Mediterranean Sea, where most tourist activity is concentrated. “The Albanian Riviera” contains a remarkable variety of coastal characteristics, including soft, sandy beaches, sea caves, capes, lagoons, and uncommon rock formations. Other Albanian destinations worthy of note include the mountainous region of the Albanian Alps and the historical cities of Berat and Korçë. Traditional Albanian culture values hospitality to outsiders, and it’s considered an honor to host a guest. Likewise, visitors are expected to behave with respect to local customs.

Most Albanian attractions are well connected by a newly refurbished network of motorways, but minor roads in rural areas are still in pretty poor condition. Otherwise, the most economical and efficient way of exploring the country is by car hire — preferably an SUV, if traveling outside major cities. Devoid of toll roads, driving around Albania is exceedingly straightforward and in-line with other European nations. Local drivers aren’t particularly well-behaved but their driving habits aren’t obnoxious, or really anything you won’t find in regions with a similar economy. Navigation isn’t terribly difficult but as Albania continues to upgrade its transportation infrastructure, road maps are out-of-date, so you’ll definitely want to rent a car with GPS. It’s not uncommon to see cows and other livestock on the roads, as Albania is still transitioning from an agrarian to service-based economic model.

Tips and advice for renting a car in Albania

It may sound exaggerated, but informed travelers and locals alike say foreigners should expect to be stopped by police at least once a day, and in some areas, once an hour.

Frequent speed limit changes are common on major highways, often for no obvious reason — other than police speed traps. Likewise, temporary lane closures and temporary No Left Turn signs that weren’t there the day before.

Foreign drivers are generally checked for proper documentation (i.e. rental agreement, driver’s license) and sent on their way. However, in the case of an actual traffic related infringement, you may receive a fine that’s due immediately. Credit cards are not accepted.

The capital of Tirana is plagued by ongoing road construction with no end in sight. Congestion is the rule of law throughout the city, day and night.

You may be approached by beggars when your car is stopped at a traffic light. The local method of shaking them is to drive forward into the intersection; however, you’re better off simply ignoring them.

Car rentals in Albania are a relatively new phenomenon, so expect a few hiccups in the process, such as limited supplies of cars with automatic transmission. Meanwhile, most rentals are found only at the airport in Tirana which is adequately serviced via our website connecting you to reputable companies and good deals.

Are you driving a rental car in Albania?

Frequently asked questions about renting a car in Albania

1. What is the best time of year to book a rental car in Albania?

2. Is it possible for one way rentals in Albania?

3. Should I rent a round trip or one-way rental in Albania?

4. Which location should I rent my car from in Albania?

5. Do I pay more fees and taxes for renting a car at the airport in Albania?

6. What insurance do I require for driving a rental car in Albania?

7. What is the best way to save money on rental car insurance in Albania?

8. Should I prepay my rental car booking in Albania?

9. What are the largest numbers of vehicle seats available for a rental car in Albania?

10. What types of sports and special cars are available in Albania?

11. Can I take my rental car across borders in Albania?

12. How do I inform the rental company I will be crossing a border from the Albania?