@ ALL LOCATIONS IN
Andorra 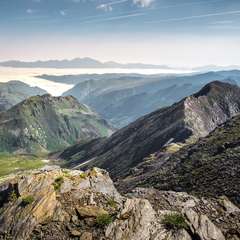 Andorra (AD) is a small independent country on the border between France and Spain in the Pyrenees Mountains. Primarily known for its world-class ski resorts and duty-free shopping opportunities, Andorra has a wide range of landmarks and cultural attractions to warrant a visit in any season.

Tourism accounts for the majority of the principality’s GDP, with more than 9 million visitors annually. The country's picturesque capital, Andorra la Vella, is the main hub of commerce, recreation, and transportation, where most visitors will spend at least a minute or two.

The bulk of land area is either uninhabited or designated national parks, which feature broad, steep mountain faces and deep river valleys with spectacular views. Andorra’s second city, El Pas de Casa, located on the eastern border with France, is the entry point for the 3-kilometer Tunel d’ Envalira, and more of a rest stop and residential community than anything else. Although the country supports dozens of small villages, the majority of action off the slopes and away from the resorts takes place in Andorra la Vella.

Getting around Andorra without a private vehicle is extremely inefficient. Andorra doesn’t have a significant airport, or even a large airport within a reasonable distance, and all foreign visitors arrive via bus from France or Spain, or they rent a car in Toulouse (185 km / 116 mi) or Barcelona (198 km / 119 mi), and self-drive into the country.

On that note, there’s precisely one dual carriageway with two entry points into Andorra; one on the Spanish side (CG-1), and one on the French side (CG-2). The overwhelming majority of Andorra’s roads are in good shape, but full of mountain inclines and hairpin turns.

Traffic across the country is generally slow, with congestion during peak seasons. Andorra’s only other major highways, CG-3 and CG-4, originate in the capital and head north to the resorts in La Massana, Erts, and Pal. Generally speaking, driving in Andorra is uncomplicated and distances are exceptionally short. It’s a 35-kilometer drive from one end of the country to the other, and most villages are separated by fewer than 5 kilometers. The only significant challenge is parking in the old town section of Andorra la Vella, and of course, mountain driving, especially in the ski season which may involve icy roads.

Tips and advice for renting a car in Andorra

Driving into Andorra from either side is generally not a problem, and you’re likely to be waved through at the border crossing. Driving out of Andorra will involve a stop and the border checkpoint, and expect delays throughout the year.

When entering from the French side, you can save a significant amount of switchback mountain driving by paying to use the Tunel d'Envalira.

Be very aware of pedestrians, bicycles, and livestock on the roads.

Driving in Andorra during the summer is doable with a smaller car. However, during the long winter season from November to April, all-wheel drive vehicles are highly preferable. Book your Andorra car rental far in advance to reserve the suitable vehicle.

Do a thorough inspection of your Andorra car hire for pre-existing damage, as well as to confirm that all features are working properly.

Are you driving a rental car in Andorra?

Frequently asked questions about renting a car in Andorra

1. What is the best time of year to book a rental car in Andorra?

2. Is it possible for one way rentals in Andorra?

3. Should I rent a round trip or one-way rental in Andorra?

4. Which location should I rent my car from in Andorra?

5. Do I pay more fees and taxes for renting a car at the airport in Andorra?

6. What insurance do I require for driving a rental car in Andorra?

7. What is the best way to save money on rental car insurance in Andorra?

8. Should I prepay my rental car booking in Andorra?

9. What are the largest numbers of vehicle seats available for a rental car in Andorra?

10. What types of sports and special cars are available in Andorra?

11. Can I take my rental car across borders in Andorra?

12. How do I inform the rental company I will be crossing a border from the Andorra?