@ ALL LOCATIONS IN
France 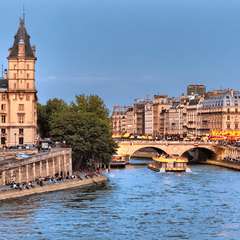 France is the world’s top tourist destination, drawing almost 90 million international visitors annually. The beautiful capital city of Paris, also known as the “City of Lights,” has some of world’s most iconic (and romantic) landmarks, including the Eiffel Tower, the Louvre Museum and the Cathédrale Notre-Dame de Paris.

In the south of France, you can discover the charming villages and lavender fields of Provence, then head to the beaches of the glamorous French Riviera. In the more central parts of France, you will find the wineries of the Burgundy region, as well as the castles of the Loire Valley. Other top draws in France include the gastronomic delights of Lyon, and two impressive mountain ranges (the Alps and the Pyrenees). Planning a road trip with your car rental in France is the best way to discover this lovely country.

France has, for the most part, excellent roads, with a network of well-maintained—albeit often private (and therefore somewhat expensive)—highways. In some of the historic downtown areas, however, the roads might be narrow and difficult to navigate, as they were not designed for cars. Even small villages generally offer parking outside the historic city center, so you can leave your French car hire and walk.

In France, car rental companies include Avis, Sixt , Europcar and Hertz. If you are staying in more urban areas, you can go for a cheap rental car such as a compact or a mini, which is easy to navigate and park. Families can go for an SUV or mid-range option, such as from Peugeot or Toyota. Larger groups may want to book a truck, people mover or 7—12 person mini van. For business travelers, a spacious luxury sedan, such as an Audi or Mercedes-Benz, is an excellent choice.

Tips and advice for renting a car in France

According to French law, you must have a high-visibility vest (“gilet” in French) and a warning triangle in your vehicle. You must use these if you pull over and step out of the car. While these items are likely included in your rental, double check to make sure.

While on the road, you may see signs for a “village étape,” a village that usually has an attraction, such as a castle or winery. It’s an excellent way to take a break from driving, as well as discover something new.

If you are under 21 years old, you will not be able to rent a car. Expect a young driver surcharge for those under 25.

Traffic conditions and information about tolls can be found on the official website of the ASFA (French motorway companies). The link is: www.autoroutes.fr/.

The major highways have rest stops known as “aires,” which are pleasant areas that offer a number of amenities such as restrooms, picnic tables and restaurants.

Are you driving a rental car in France?

Here's some more in depth France driving rules and guidelines for car renters:

It is absolutely necessary to equip yourself with all of the available information before getting behind the wheel in your chosen country. A lack of driving knowledge can quickly zap all the fun out of your holiday.

Here is a guide to some of the important rules and regulations when driving in France. Abide by these and you’ll be free to enjoy the beautiful French roads and scenery at your own leisure:

It is obligatory to carry your driving license, vehicle registration document and certificate of motor insurance. If the vehicle is not registered in your name, then a letter of permission from the owner is required. In the case of your licence not having your photograph, you must carry your passport to back up the license. Being caught driving without any of these documents will result in a fine and a possible licence suspension. If you are using a rented car, talk with your car rental company for specific details.

The minimum age for driving in France is 18. Your licence will not be valid in France if you are under this age.

Warning: An instant fine will be issued for using your mobile phone at the wheel.

The normal speed limits on French roads are as follows:

Warning:  Not adhering to these limits will attract on-the-spot fines and in the case of being caught driving 50km/hour (just over 30mph) over the limit, you will face an instant ban from driving.

The tolerated Blood Alcohol Content (BAC) in France is 0.05g/1L which equates to about two glasses of wine. Driving in excess of this amount or failing to cooperate with a breath test will result in a large fine and a driving suspension of around two years. Any subsequent offence will see you off the road for four years. Other more serious offences involving driving under the influence of alcohol could result in imprisonment.

Warning:  Any offence involving drugs will lead to a stretch of jail time for up to nine years.

A fee is charged for parking. Spaces marked in white are permitted for parking. Parking tickets can be purchased from the machines along the roadsides and should be displayed on the front of the car. The parking sign in the particular area will tell you the time permitted.

Warning: Parking in Paris may be very difficult unless you’re staying in a hotel. The majority of roads are pedestrianized and parking for more than 24 hours in the same space is illegal!

As one of Europe’s top tourist destination, France is a country of great contrasts, providing an intrepid traveller with practically any type of holiday they might be looking for.

Of course, France is perhaps best known for the jewel in her crown, Paris! This metropolis is a tourist’s delight and one of the most visited cities in the world. However, don’t just be caught up in the glitz and glamour of the French capital.

France really has so much more to offer including its lush countryside as well as stunning sun-kissed beaches along its coastline, particularly along the Mediterranean.  So hop in your rental car and hit the open road, travelling on some of the country’s 40 000 kilometre highway network.

A word of advice, don’t be afraid to wander down that small country lane, you never know what amazing adventure awaits you at the end of it.

Perhaps one of the most famous cities in the world, a visit to France is not complete without a stopover in the “City of Light”. Situated on the River Seine, there is so much to see and do in the capital of France, that thorough planning is needed before you even get there.

It depends on where your interests lie as Paris literally has it all. From incredible shopping, gastronomic delights, cultural attractions, Paris has something for everyone.  There a few “must see” attractions, however. Families will love Disneyland Paris, a treasure trove of activities for young and old alike. The views from the Eiffel Tower of the surrounding city are breathtaking and well worth the wait in the queues below. For art lovers, the Louvre Museum is simply a must, while other museums and art galleries can be found throughout the city.

Accommodation in Paris varies significantly, from luxurious hotels and rental apartments to hostels and smaller more intimate pensions; Paris has something to suit every budget.

The “Coast of Blue” is situated on the Mediterranean Sea and more commonly known as the French Riviera to tourists. This stretch of coast is filled with numerous sea-side resorts and just lends itself to discovery at a slow pace by rental car.

Be sure to stop in Nice, not only for the incredible views of the coastline (don’t forget your camera), but the town is also filled with a number of memorable art museums and mouth-watering Mediterranean cuisine options at its numerous restaurants.

If you love the sun, wind your way to Saint-Tropez. Not only does it offer beautiful beaches, but it has its own unique fishing village charm. If you want to feel a bit like the rich and famous do, a stop in either Cannes or Monaco will suffice.

Situated on the north-eastern coast of the country, Brittany offers a view into country life in France. This region is filled with small coastal fishing villages and very traditional local food. Notable towns in the area include Saint-Malo and Quimper, home to a beautiful Gothic cathedral.

Castles and ancient ruins are scattered around the countryside, sandy beaches, less crowded than those found on the Côte d'Azur, sit all along the Brittany coastline.

Cheaperthancars and Cheaperthanhotels are all about great deals on not only car rental but accommodation as well. These two expenses take up a large part of any holiday budget but we save you money, allowing you to spend more on having FUN!

Frequently asked questions about renting a car in France

1. What is the best time of year to book a rental car in France?

2. Is it possible for one way rentals in France?

3. Should I rent a round trip or one-way rental in France?

4. Which location should I rent my car from in France?

5. Do I pay more fees and taxes for renting a car at the airport in France?

6. What insurance do I require for driving a rental car in France?

7. What is the best way to save money on rental car insurance in France?

8. Should I prepay my rental car booking in France?

9. What are the largest numbers of vehicle seats available for a rental car in France?

10. What types of sports and special cars are available in France?

11. Can I take my rental car across borders in France?

12. How do I inform the rental company I will be crossing a border from the France?