@ ALL LOCATIONS IN
Malta 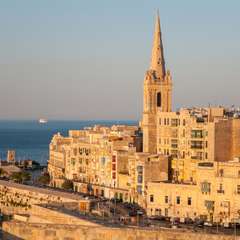 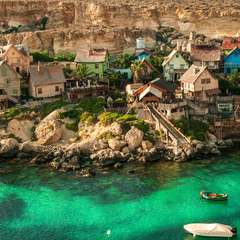 The country of Malta MT) is a tiny archipelago in the Mediterranean Sea situated south of the island of Sicily. The island of Malta is by far the largest and most populated of the island group, with Gozo being somewhat developed, and Comino being the smallest of the three.

A handful of smaller islands around Malta and Comino are uninhabited. The majority of Malta’s top destinations will be found on the mainland, and include historic attractions and beach resorts. Despite its relatively remote location, Malta is actually quite popular with budget-minded European visitors, especially in the peak summer months. Given its compact size and beautiful climate, tourists find that it’s easy to fill an itinerary with things to see and do, although the country is known for having an exceedingly laid-back atmosphere. Malta’s rich history of Roman, Arab, and European occupation makes for some fascinating discoveries.

Getting around is far more cost-effective and convenient when you rent a car in Malta from one of the major suppliers.

Maltese car rentals are surprisingly cheap and its road network has benefited from recent and continuing improvements. Given its reliance on tourism for their livelihood, the Maltese government has good reason to make things as smooth as possible. At any rate, some issues pop up here in the form of street names in Maltese, and congestion around the popular tourist sites. Visitors report problems with GPS giving bad directions, but you’re generally not going to get too lost in such a small place. Meanwhile, locals are exceptionally friendly about giving directions, and quite forgiving about unintentional mistakes, such as driving the wrong way on a one-way road.

Tips and advice for renting a car in Malta

Because car rentals in Malta are so affordable, it seems like everybody wants to rent a car during their stay. Therefore, it’s highly recommended to book your vehicle as far in advance as possible.

There’s a roll-on/roll-off ferry boat between the islands of Malta and Gozo. Your car hire vendor should take the pro-active measure of talking about its restrictions for the ferry, but if they don’t — ask.

Roundabouts are common throughout the country and visitors from right-side driving countries should get familiar with navigating these traffic circles before actually attempting to navigate said roundabouts.

As a predominantly Roman Catholic country, Malta observes the Sabbath, so many establishments outside of Paceville and St. Julian’s are closed on Sunday.

Malta is considered very safe for travelers; however, Paceville has a reputation for drunken revelry in the evenings, and fights are said to be common.

Parking is a big problem in many areas of Malta. The general idea is to get in where you fit in, but you’re strongly advised to avoid parking anywhere near double yellow lines. Also be aware of timed-parking zones (usually up to one hour) that tend to be strictly enforced. Nothing can spoil a vacation like getting your Malta car hire clamped, or worse, towed away — although the latter is quite rare and reserved for egregious violations.

Are you driving a rental car in Malta?

The Maltese archipelago lies virtually at the centre of the Mediterranean with around 300 days a year sunshine. Boasting beautiful beaches, a thriving nightlife and 7,000 years of intriguing history that include megaliths and medieval dungeons, Malta is an exciting, affordable destination.

Malta is the largest of the 3 islands, with Gozo being a lot smaller and more rural, and the largely uninhabited Comino with picture-perfect beaches and one hotel.

The countryside is dotted with medieval towers, wayside chapels and the oldest known human structures in the world. The Maltese Islands also attract a large percentage of water-sports fans and sun seekers.  Just the place for adventure-seeking visitors on a budget.

Rent a car and find the hidden spots

Even though Malta and Gozo are small, renting a car is the recommended way to explore the Islands.  Public transport is readily available, but can be cumbersome and expensive.

Since Malta is an island of seaside resorts such as St Paul’s Bay, you can walk the seafronts stopping to pose for that poster-perfect photo. You’ll also find some great night-life with plenty of stylish restaurants, bars, and a youthful crowd at locations such as St. Julian’s and Paceville. A winding coastal road connects the southern towns with the northern parts and the ferry going to Gozo - a 30km stretch of road that can take many hours to explore.

During February you’ll also be able to enjoy the fireworks, masked balls and all-night parties that make up Malta’s Carnival - a tradition that’s been running for five centuries. Maltese just love their festivals!

For a theme park with a difference, head to Anchor Bay to explore the charming Popeye Village which was the set for the Robin Williams film in 1980. And on the way there, you can make a small detour to see the ancient fortified city of Rabat and Mdina.

While on your way, make sure to try the local pies called ‘pastizzi’, to be found in every Maltese village and town. Served hot, these are delicious.

Entertainment on the whole is not expensive, but if you intend visiting several heritage sites, remember to get a cheaper Multipass obtainable from any of the sites.

Valetta, Malta Island’s capital, has a waterfront city skyline to rival that of Venice. Arguably the best preserved city of its kind in the world, this remarkable 16th century creation of the Knights of St John is also a Unesco World Heritage city.

The capital today is still one of the most concentrated historic areas in the world. Valetta has not experienced urban sprawl and is therefore a gem of a city. The baroque architecture, impressive historical sites, quaint shops and restaurants all make Valletta a fascinating place to explore.

Get hooked on Gozo

Gozo is a 20 minute ferry trip from Malta.  The ferry terminals are in Circewwa in northern Malta and Mgarr in south Gozo.  You simply drive up to the terminal, pay for your ticket and drive onto the ferry.

The charm of the island makes itself apparent as soon as you arrive.  The best part about Gozo is the food, beaches, diving, snorkeling, water-sports, hiking and cycling — all very affordable or free.  From the Blue Hole and Azure window in the East to the bustling tourist town of Marsalforn in the north-west, you will love the air of tranquility even in the busy market street of its capital, Victoria, and in the harbours when the day’s catch comes in.

The magical islands of Malta will capture your imagination and will leave you with a lifetime of memories to share.

For a totally different adventure with a historical flavour, Malta should be your next value-for-money destination. To top that, the best deals in car rentals and accommodation is now available from Cheaperthancars and Cheaperthanhotels.

Frequently asked questions about renting a car in Malta

1. What is the best time of year to book a rental car in Malta?

2. Is it possible for one way rentals in Malta?

3. Should I rent a round trip or one-way rental in Malta?

4. Which location should I rent my car from in Malta?

5. Do I pay more fees and taxes for renting a car at the airport in Malta?

6. What insurance do I require for driving a rental car in Malta?

7. What is the best way to save money on rental car insurance in Malta?

8. Should I prepay my rental car booking in Malta?

9. What are the largest numbers of vehicle seats available for a rental car in Malta?

10. What types of sports and special cars are available in Malta?

11. Can I take my rental car across borders in Malta?

12. How do I inform the rental company I will be crossing a border from the Malta?