@ ALL LOCATIONS IN
Paraguay 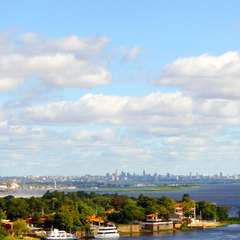 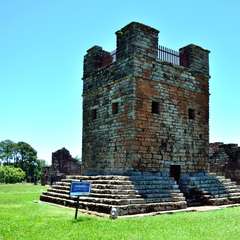 The landlocked nation of Paraguay (PY) in central South America, bordered by Argentina, Bolivia, and Brazil, is a study in cultural, historical, and contemporary paradox.

It’s one of the wealthiest poor countries on the planet: rich in natural resources but among the least developed nations in the Western Hemisphere. Due to decades of political turmoil and social reform, international visitors have generally kept their distance from a naturally diverse ecology and resplendent landscape of savannahs, swamplands, subtropical forest, rivers, lakes, and vast areas of untouched wilderness.

It’s only been within the past decade that tourists have started to appreciate the beauty and wonder of Paraguay, which all begins in its capital city of Asunción in the Southern Paraneña region. But most of all, first-time visitors are pleasantly surprised to find a warm and welcoming atmosphere in a place that’s been anything but peaceful for much of its existence.

Paraguayans are a proud people, but they’ll be the first to admit the best way for foreign visitors to explore is to rent a car in Paraguay.  While the majority of worthwhile destinations are accessible from its network of buses and trains, traveling by private vehicle is by far the most reliable mode of transportation.

Generally speaking, the southern half of Paraguay is where all the action is found, and its cities and towns are linked by a web of mostly two-lane roads in fair condition — by South American standards — but travel by car to the remote northern regions is prohibitive and dangerous.

The riverside city of Asuncion is not unlike any midsized city in a Western country; in fact, its grid system is notably easier to navigate than most cities in France. The Paraná River, home to the second largest city of Ciudad del Este, and the world-famous Iguaçu Falls, is easily accessible from the capital via national highway. Overall, expect less than ideal road conditions and don’t hit the road without GPS.

Tips and advice for renting a car in Paraguay

Most of the paved surfaces outside of Asuncion are toll roads, and it’s not unheard of to come up on a toll booth on a desolate rural one-lane gravel road.

Traffic police in Paraguay have a reputation for targeting tourists, particularly in the countryside. While difficulties are far less likely in the major cities and larger towns, locals say the best way to know if you’re being fined for a violation or solicited for a bribe is to ask for a receipt!

English is not widely spoken outside of the wealthy parts of Paraguay, although the majority of locals understand spoken English. They simply don’t speak it. Thus, you’d be doing yourself a favor by learning some Spanish.

Unlike many South American tourist destinations, social etiquette is extremely important to Paraguayans, and even though you’re a visitor, you’re expected to know the bare minimum of respectful norms. This includes knowing which subjects to avoid in conversation, how to greet a stranger, and how to dress in public.

Avoid traveling at night in Paraguay, even in larger cities and towns.

Are you driving a rental car in Paraguay?

Frequently asked questions about renting a car in Paraguay

1. What is the best time of year to book a rental car in Paraguay?

2. Is it possible for one way rentals in Paraguay?

3. Should I rent a round trip or one-way rental in Paraguay?

4. Which location should I rent my car from in Paraguay?

5. Do I pay more fees and taxes for renting a car at the airport in Paraguay?

6. What insurance do I require for driving a rental car in Paraguay?

7. What is the best way to save money on rental car insurance in Paraguay?

8. Should I prepay my rental car booking in Paraguay?

9. What are the largest numbers of vehicle seats available for a rental car in Paraguay?

10. What types of sports and special cars are available in Paraguay?

11. Can I take my rental car across borders in Paraguay?

12. How do I inform the rental company I will be crossing a border from the Paraguay?