@ ALL LOCATIONS IN
Samoa 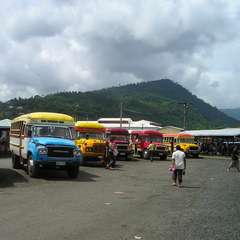 Samoa (WS) is an archipelago in the South Pacific Ocean situated roughly halfway between New Zealand and the Hawaiian Islands (and not to be confused with American Samoa).

Its two main islands, Upolu and Savaii, are home to most of the country’s population, as well as the majority of tourist destinations. The capital city of Apia is located on Upolu and the primary gateway for international travelers.

Samoa has an impressive array of attractions — waterfalls, volcanoes, blowholes, caves, lava fields, ancient villages and beautiful, mostly empty beaches — but for whatever reason, its tourism industry has never taken off.

The lush, densely forested islands are dominated by agriculture for export. Otherwise, overseas remittances and foreign aid are the foundations of Samoan livelihood. The island of Savaii is far less developed than Upolu and thus, not amply equipped with travel amenities.

On the other hand, the Samoan people are known for genuine friendliness and an eager desire to share their traditional culture with outsiders. If you’re considering a trip Samoa, now would be a good time to do it, since tourism is bound to increase in the future, and you can beat the rush by getting in early to enjoy it’s unspoiled beauty.

Visitors who rent a car in Samoa will have far greater mobility and independence than those who chose to rely on the local bus system.

Navigating the islands will be exceedingly straightforward, with main roads circling the coastlines, and unpaved roads leading into the forested interiors. However, there are some significant differences between driving on Upolu and Savaii.

Traffic congestion is extreme in and around the capital of Apia, while the majority of roads in Savaii are unpaved, and thus, very slow-going. Generally speaking, the pace of life is night and day as well. Things are comparatively hectic on Upolu, while Savaii is quite relaxed and laid-back. Locals in both places are renowned for their laisse-faire attitude toward responsible driving, and road conditions are not the best in many areas.

But that said, getting out of the main urban center is uncomplicated, with fairly well-marked roads and decent traffic controls.

Tips and advice for renting a car in Samoa

Samoa car rentals may not include Collision/Loss Damage Waiver or Theft Protection, so check on options provided when booking.

You usually must purchase a temporary Samoa driver’s license from your Samoa car hire provider at the time of pick-up.

Debit cards are not generally accepted for booking or payment of your Samoa car rental, so prepare by bringing along your credit card which needs to match the main driver’s name. If not, bring extra ID with you.

You must be 21 to rent a car in Samoa, with no underage fees.

Be sure to do a complete assessment of your car hire’s roadworthiness before taking delivery of the car. This includes checking for pre-existing damage, as well as inspecting the primary features of the car to make sure they’re working properly.

Book your Samoa car hire well in advance to reserve an SUV especially around holiday times such as Christmas, New Year or Easter Holidays.  As the most popular vehicle on Samoan roads, rental fleets are quickly depleted.

Frequently asked questions about renting a car in Samoa

1. What is the best time of year to book a rental car in Samoa?

2. Is it possible for one way rentals in Samoa?

3. Should I rent a round trip or one-way rental in Samoa?

4. Which location should I rent my car from in Samoa?

5. Do I pay more fees and taxes for renting a car at the airport in Samoa?

6. What insurance do I require for driving a rental car in Samoa?

7. What is the best way to save money on rental car insurance in Samoa?

8. Should I prepay my rental car booking in Samoa?

9. What are the largest numbers of vehicle seats available for a rental car in Samoa?

10. What types of sports and special cars are available in Samoa?

11. Can I take my rental car across borders in Samoa?

12. How do I inform the rental company I will be crossing a border from the Samoa?