@ ALL LOCATIONS IN
Tunisia 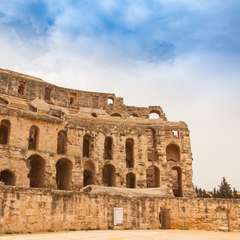 Tunisia (TN) is situated in Northern Africa on the coast of the Mediterranean Sea, sharing borders with Libya and Algeria. Though frequently overshadowed by Egypt and Morocco, Tunisia is a fascinating and vibrant destination for tourism, featuring a diverse terrain, temperate climate, and a wide range of historic and leisure-based attractions.

Its collection of ancient ruins includes some of the best-preserved Phoenician and Roman settlements in the Mediterranean, while its beaches rate among the best in the world. From the easy-going capital of Tunis to the desolate expanse of Saharan Desert, Tunisia is popular with travelers looking to experience the region without the expense and hassle of comparable destinations.

Few places have successfully integrated the influence of European, Arabian, and African cultures while maintaining an identity all its own.

Getting around is most efficient and cost-effective for visitors who arrange for a car hire in Tunisia. The network of highways and roads was designed to follow a European model, with dual carriageway routes serving long-haul destinations, and single carriageways linking the more remote attractions.

The A1 connects Tunis to the beaches of Sfax and the Gulf of Gabes; the A3 heads west to the Roman ruins in Dougga; while the A4 runs north to the coastal city of Bizerte.

Road conditions in the north are significantly better than those in the south, but generally speaking, driving in Tunisia is not nearly as stressful as neighboring countries.

Road signage is in Arabic and French, with numerous signs in English around the major attractions such as those found in Carthage and Jebil National Park. Like most developing countries, experienced drivers will fare much better than beginners, although Tunisia is a great place to get familiar with North African transportation, without putting yourself at tremendous risk.

Tips and advice for renting a car in Tunisia

Third-party liability insurance is required to rent a car in Tunisia, but not available to foreigners through the car hire providers. Therefore, you must obtain your own insurance prior to arrival. Check with your credit card issuer to see if you’re covered for driving in Tunisia or travel insurance.

Car rentals in Tunisia are generally more expensive when picked-up from airports, as opposed to renting from a vendor in the major cities. Be advised that you’ll save money by returning the vehicle to the same location.

Tourists in Tunisia are regularly pulled over by police who will demand to inspect the vehicle for mandatory equipment such as fire extinguishers. Do a thorough assessment of your car hire to make sure nothing is missing.

The majority of major highways in northern Tunisia are fairly well illuminated, so driving at night is not an issue; however, nighttime travel is not recommended in the central and southern regions.

Checkpoints are scattered throughout the country, but contrary to most destinations, authorities are far more interested in your well-being than finding contraband.

It’s always a good idea to discuss your travel plans with your car rental hire provider, especially if you’re planning to cross international borders or trekking into the desert. Some restrictions may apply.

Are you driving a rental car in Tunisia?

Frequently asked questions about renting a car in Tunisia

1. What is the best time of year to book a rental car in Tunisia?

2. Is it possible for one way rentals in Tunisia?

3. Should I rent a round trip or one-way rental in Tunisia?

4. Which location should I rent my car from in Tunisia?

5. Do I pay more fees and taxes for renting a car at the airport in Tunisia?

6. What insurance do I require for driving a rental car in Tunisia?

7. What is the best way to save money on rental car insurance in Tunisia?

8. Should I prepay my rental car booking in Tunisia?

9. What are the largest numbers of vehicle seats available for a rental car in Tunisia?

10. What types of sports and special cars are available in Tunisia?

11. Can I take my rental car across borders in Tunisia?

12. How do I inform the rental company I will be crossing a border from the Tunisia?