@ALL LOCATIONS IN THE UNITED ARAB EMIRATES 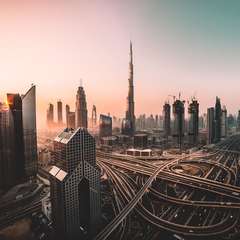 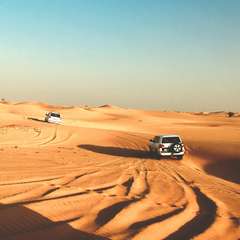 About the United Arab Emirates (UAE)

Situated at the southeastern tip of the Arabian Peninsula, the United Arab Emirates (UAE) is home to a diverse range of destinations, from the modern megacities of Dubai and Abu Dhabi, to the gorgeous beaches of Fujairah on the east coast.

Rich in history and culture, the U.A.E. is renowned for massive stretches of remote desert landscape. More than half of the country is contained in the remote Empty Quarter that occupies the desolate western half of its boundaries. Indeed, the common misconception about the Arabian Peninsula in general is that it’s nothing but sand. But in addition to the most popular urban sites, the U.A.E. includes a number of relatively undiscovered natural attractions including the desert oases of Al Ain, featuring waterfalls and other surprisingly pristine topographical features. It’s said that the best attributes of the U.A.E. are found by knowing where to look for them.

International travelers generally enter the U.A.E. in through the airports of Abu Dhabi or Dubai. For most visitors, getting around the U.A.E involves a familiar driving environment, best facilitated by car hire. Public transportation is skeletal, at best. Fortunately, the U.A.E. is also known for cheap car rental rates and relatively inexpensive fuel prices. You’ll find an extensive highway system linking the major cities and outlying areas. By first appearance, the roads are inline with European and Western standards — consisting of broad, paved, well-marked roadways. However, as in many Middle Eastern countries, local driving habits on the fast freeways can be downright frightening. Therefore, experienced drivers with advanced defensive driving skills will likely fare better than brand new beginners.

The U.A.E. is a country in constant development, and navigational systems do a great job of keeping up with changes. As road networks continue to evolve, hardcopy maps have become obsolete. Therefore, GPS is highly recommended for all visitors who rent a car.

United Arab Emirates car rentals are provided by the most trusted names in the business: Alamo, Avis, Budget, Dollar, Enterprise, Europcar, Hertz, National, Sixt and Thrifty. You’ll find a comprehensive selection of vehicles from minicars to economy cars to luxury and premium 4-door sedans. Group travelers will find an exceptional range of 7-12 seater minivans. But perhaps the most popular UAE car rentals are all-wheel drive SUVs, which are ideal for on and off-road driving.

Tips and advice for renting a car in United Arab Emirates

The emirate of Ajman is gaining a reputation as a terrific budget destination. Centrally located on the western coast of the Persian Gulf, the region supports a relatively laid-back atmosphere in contrast to the hustle of most major cities.

Just north of Ajman, you’ll find the emirate of Umm al Quwain, the most tranquil and green region of the U.A.E., home to coastal mangroves, the oases of Falaj Al Moalla, and rolling sand dunes to the south of the city center.

Respect is paramount in the U.A.E., which ultimately means being conscious of local sensibilities, and following them to the letter. Dress conservatively, be polite, and get familiar with the laws as well as local customs.

If renting a car in Dubai, your vehicle should be equipped with a Salik tag, which allows you to access the toll road system. Otherwise, the U.A.E. is free of toll roads.

Road accidents are on the decline in the U.A.E., but still among the highest in the world. If you are involved in an accident, first of all, do not move the car — unless it’s causing a traffic hazard. If no one is injured, only then should you move the vehicle to the side of the road — if possible. Most importantly, stay on the scene until police arrive.

It’s important to remain calm amidst the chaos of highway driving, where you’re likely to be cut off or forced to change lanes at moment’s notice. Avoid any outward signs of “road rage”, especially offensive gestures, which are prohibited and carry stiff penalties.

Are you driving a rental car in The United Arab Emirates?

Getting around by car in The UAE can be a good idea because the public transport there is very limited. Driving around The UAE can be a pleasurable experience because the roads are modern and in excellent condition; however, you must not forget that there will be many aspects of driving etiquette and rules that may be unfamiliar to you. This guide serves to equip you with some indispensable knowledge about the rules of the road in The UAE.

When driving in The UAE it is necessary to carry:

It is highly recommended to follow these general speed limits whilst driving in The UAE:

There will be many specific limits for particular roads, expressways and beach roads which you should adhere to carefully. Speed limit signs are usually posted just after a speed camera.

There are a number of speed radars on the roads and you will be given a speeding fine if detected.

The UAE operate a zero tolerance towards alcohol. Being caught with any amount of alcohol in your system could mean time in prison and fines.

If you are found to be intoxicated you will face time in prison and your insurance would be invalidated.

Free parking is usually found in car parks that belong to shopping, hotels and supermarkets. However they are often difficult to find a space in.

Some areas in The UAE are subject to parking charges.

Road side parking and off-street car parks are usually free from 13:00-16:00, Fridays and public holidays. Orange solar powered ticket machines provide you with a parking ticket.

Parking on the road is not permitted anywhere, except in marked bays.

Parking fines are issued for failure to pay a parking fee.

The United Arab Emirates (U.A.E.) is situated on the Arabian Peninsula on the eastern entrance to the Persian Gulf.

The U.A.E. is used as a starting point for many tourists as they travel through the Persian Gulf region. Abu Dhabi, the capital of the country is a popular destination, but almost everyone who visits the country spends most of their time in Dubai which incidentally is the seventh most visited city in the world.

Dubai is a shopper’s delight and welcomes over 14 million tourists every year! Shopping, although the mainstay of Dubai’s charm is not the only attraction in the city. It is filled with districts of historical and cultural significance, including the area around Dubai Creek which has been proposed as a UNESCO World Heritage site.  Other tourist attractions in the city include the Dubai cable car, camel rides, bird shows and the Dubai Dolphinarium.

The U.A.E has some incredible infrastructure, including roads. Many tourists opt to discover the country at their own pace by rental car.

The route up the Jebel Hafeet mountain is widely recognized as one of the best driving roads in the world, especially loved by the U.A.E. elite and their supercars! Of course, that doesn’t mean a trip along this twisty section of road is not a perfect outing in your rental car!

The road itself was constructed in 1986 and includes a 1250m climb to the summit of the mountain. No need to worry about those supercars either, there are two lanes going up, so take your time to enjoy the spectacular views this road affords.  Jebel Hafeet is only 160km from Dubai on the E-66.

This cross-border trip to Oman is well worth it, just don’t forget your passport! The drive alone takes you through some of the most scenic areas in the U.A.E. dominated by the Persian Gulf and beautiful mountain ranges.

Once in Dibba, consider at trip on a Dhow boat. These head out to various locations including Sheesa Beach. Other activities in the region include rock climbing, mountain biking, swimming, snorkelling and kayaking.

The beautiful location of Fossil Rock is situated a mere hour outside Dubai although you may want to consider a 4x4 rental vehicle (or at least one with a higher ground clearance) to access certain areas.

Other than stunning views (don’t forget your camera), there are a number of interesting areas to visit around Fossil Rock itself. These include Camel Rock, the village of Nazwa and the beautiful red sand dunes in the area.

Cheaperthancars and Cheaperthanhotels are all about great deals on not only car rental but accommodation as well. These two expenses take up a large part of any holiday budget but we save you money, allowing you to spend more on having FUN!