@ ALL LOCATIONS IN
Uruguay 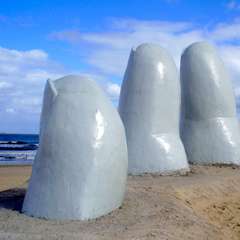 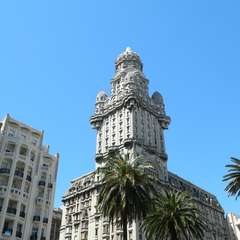 The best kept secret of South American travel destinations has to be Uruguay (UY), sometimes referred to as the “Switzerland of Latin America” for its prosperous economy and highly developed social welfare programs. Uruguay’s terrain, as of this writing, is not at all mountainous. Located on the South Atlantic coast, Uruguay is bordered by Brazil to the north and Argentina to the west. Most visitors come to Uruguay for the clean, uncluttered beaches and variety of historical attractions. Its primary natural destination is Lago Rincon del Bonete (Lake Rincon) situated in the central part of the country. However, travelers may be surprised to find a vibrant and dynamic cultural atmosphere in the capital city of Montevideo. Despite Uruguay’s proximity to Buenos Aires, the regions are separated by a massive river delta, with very few border crossings found 300 kilometers northwest of Montevideo.

The most cost-effective method of getting around is to rent a car in Uruguay. All roads in Uruguay typically lead back to Montevideo, and indeed, major routes all seem to radiate out from the capital on the southern coast. Drivers from Western countries will find very familiar road conditions and regulations, and anybody with a passing familiarity with Latin American driving habits will be pleasantly relived to see a much more civilized bunch of drivers on the roads. And like many South American countries, Uruguay loves its speed bumps, which are found on all roads of all shapes and sizes, but generally only marked in developed areas. Otherwise, getting around Uruguay is pleasant, efficient, and very affordable.

Tips and advice for renting a car in Uruguay

The majority of Uruguay car rentals have manual transmission — to save on fuel, which is uncommonly expensive for a South American country. Cars with automatic are generally much more costly to rent as manual gearbox.

All fuel stations in Uruguay are full service, so you’ll need a bit of Spanish under your belt to communicate with the attendant.

Roundabouts are much more common in Uruguay than neighboring countries, and the general road network is modeled after European standards.

The primary long-haul route in Uruguay (Ruta Interbalneria) is the closest thing to an expressway in terms of Western standards. Despite being a four-lane highway, all junctions and intersections are at-grade, as opposed to flyovers and underpasses. Thus, at times you’ll be required to come to a complete stop at traffic lights — not something most travelers consider when they think of “expressways”.

Outside of Montevideo is mostly farmland, sparsely populated, and road services are spread out over long distances.

Are you driving a rental car in Uruguay?

Frequently asked questions about renting a car in Uruguay

1. What is the best time of year to book a rental car in Uruguay?

2. Is it possible for one way rentals in Uruguay?

3. Should I rent a round trip or one-way rental in Uruguay?

4. Which location should I rent my car from in Uruguay?

5. Do I pay more fees and taxes for renting a car at the airport in Uruguay?

6. What insurance do I require for driving a rental car in Uruguay?

7. What is the best way to save money on rental car insurance in Uruguay?

8. Should I prepay my rental car booking in Uruguay?

9. What are the largest numbers of vehicle seats available for a rental car in Uruguay?

10. What types of sports and special cars are available in Uruguay?

11. Can I take my rental car across borders in Uruguay?

12. How do I inform the rental company I will be crossing a border from the Uruguay?